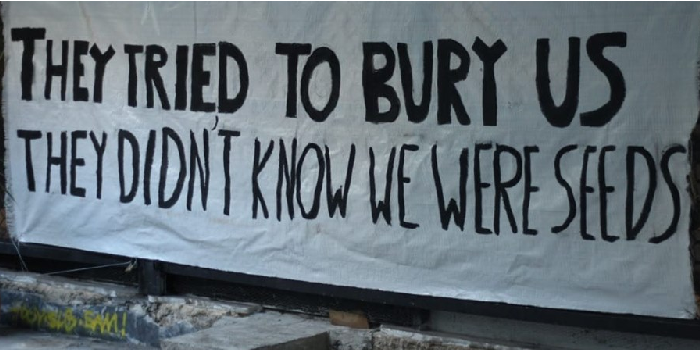 On Monday the 26th of August, the Greek police launched a large operation in Exarcheia, the famous rebel district in the centre of Athens. This is a unique place in Europe for its high concentration of squats and other self-organised spaces, but also for its resistance against repression and solidarity with migrants and the precariat.

Early in the morning, the squats of Spirou Trikoupi 17, Gare, Rosa de Fon and Transito were surrounded by huge police forces: anti-riot police, anti-terrorism police and secret police. The police then launched a large repression operation, leading to over 100 arrests. Migrants have been sent to camps known for inhuman living conditions. More than 15 kids that grew up in Athens and had their life there were deported. The security forces are now walling up the buildings that used to be home to so many.

This operation aimed to directly attack the incredible solidarity efforts that were developed by a network of people, many of them anarchists, to cope with the austerity measures the Greek state and the EU implemented. It aimed to destroy a neighbourhood that has invented a new world where it has been possible to exist and live regardless of your economical, social or cultural background. It aimed to keep Exarcheia under the control of a violent state that, like the rest of Europe, is ready to put humans in camps, simply because they were born on the other side of a border.

Exarcheia has many other squats, around 20, but the newly elected Greek prime minister promised a complete “cleaning”. More battles are to come.

The Anarchist Federation is expressing its full support to everyone in Exarcheia.

For a future without State, police or borders,