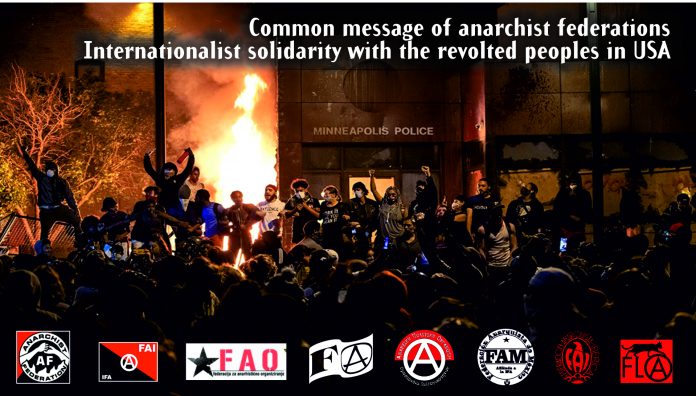 Common Message of Anarchist Federations: Internationalist solidarity with the revolted people in the USA

On May 25th, in Minneapolis, US, four policemen arrested George Floyd for allegedly using a counterfeit 20-dollar bill. While he was handcuffed, three of them threw him on the ground and held him down with police officer Derek Chauvin chocking him for over 8 minutes, even after he had clearly lost consciousness, murdering him in common view.

Police violence in the US is one of the basic pillars of a state that frantically attacks in order to maintain its power. Having caused and being involved inhundreds of imperialistic war operations, the US state bombs civilians andloots the capitalist periphery, terrorizing the planet but also its own inhabitants and, more intensively, the black, the indigenous and poor populations.

The strict class stratification of the US society, in which a small elite holds the overwhelming portion of the country’s wealth, where thousands of workers are killed due to their working conditions, became even more blatant during the evolving pandemic, as the majority of those who lost their lives come from the lower classes, the poorest, the most excluded, the most repressed.

The people of those class and racial communities have flooded hundreds of cities in the US over the last days, protesting and clashing with the police, building barricades, setting police stations on fire and destroying capitalist targets. These are the thousands of the revolted who are fighting back, outraged by the racists-murderous violence of the repressive mechanisms, by the suffocating conditions of exploitation and repression, defying the forces of the police, the national guard and the military on the streets, ordered by Trump, to terrorize, through arrests, rubber bullets and murders of protesters, those who give the battle “in the heart of the beast”, against state and capitalist brutality.

On the side of the revolted peoples of the US stand thousands of struggling people, from Mexico and Brazil, to Britain, France, Belgium, Greece, Palestine and Israel, picking up the thread of the revolt in the US and fighting against the repressive violence, racism, poverty, impoverishment and exploitation. From the demonstrations and street clashes for George
Floyd and for all those who have been murdered by the US police, to the clashes in Mexico for the killing of Giovanni López by the police, for not wearing a mask, to the demonstrations in Brazil against the fascist and murderous policies of the government led by Bolsonaro, the common struggle of Palestinians and Israelis against the murdererous policies of the Netanyahu government and the modern apartheid of which young Yihad Elkhalak is only the latest victim, the removal of the symbols of slavery that dominated the streets in Britain and the class and social clashes in France that continue and escalate despite the rising repressive violence.

These are our class brothers and sisters that are fighting to survive in every corner of the world against the pandemic and are raising their fists against state and capitalist brutality, sending a message of solidarity with all those who are resisting. They are the repressed and exploited that shed light on the path of resistance, all those that keep alive the revolt but also the battle for the overturn of the state and capitalism, for a society of solidarity, equality and freedom.

NO FREEDOM – NO PEACE

NO OTHER WORLD IS POSSIBLE, AS LONG AS STATE AND CAPITALISM EXIST