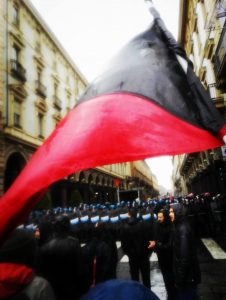 This article is a anarchist response to the Elections in Italy by a member of FAI Italy. Italian original: Elezioni: che l’astensione diventi diserzione (26th Sept 2022), Also with forthcoming publication in Umanita Nova (weekly paper of the FAI).

See also (below): Update from November 2022. Statement against the war, military spending and repressive government policies

Once again one thing is clear: the next parliament and the next government will be farer than ever from the exploited classes. Not even two out of three voters went to the polls, in some regions barely one out of two, with turnout nationally standing at 63.9 per cent, a drop of no less than nine percentage points from the previous election. At the time of writing [Monday 26 Sept. In the morning], the vote count has not yet been completed, but the data, already stable, assign the victory to the right-wing coalition. In fact, it seems that despite the drop in voters turnout, the right-wing has maintained the consensus obtained in the previous elections [2018], with just over 12 million votes. If this should lead, as all the official newspapers announce, to a government led by the fascist right, then the military caste, war production and in particular aerospace, Confindustria [Italian industrial employers federation] and the Catholic Church will have the prime standard-bearer of their privileges in government.

But beware, the political agenda of misery and war that we will have to oppose in the coming months was already the one of the government led by Draghi. That agenda would have been assumed by any government, in the name of “national interest”. The official medias and parties have been calling in chorus for a strong government, but since it will not be strong in consensus anyway, we have to imagine that the next government will be strong with the stick.

They will probably try to govern the social conflict with paternalistic handouts, with national unity propaganda, and with the help of the palace opposition through the PD [Democratic Party], the institutional left, and the CGIL [main union, close to PD]. It is important to give a different ground to the struggles, strengthening grassroots structures and forms of social opposition.

Before passing the baton to the next government, Draghi still has some important tasks on its hands: the presentation of the DEF Update Note [one of the main financial measures of the year] and the continuation of negotiations to define the European cap on gas prices. The basic policy guidelines on defence, energy and labour are transversal, as the choices of the various governments of national unity that have followed one another in recent years have shown. The last of these, which united the Lega, FI, M5S, PD, LEU – with repeated attempts to include FdI as well – made it clear to everyone that appeals to vote ‘against fascism’ are empty words for the electoral campaign. This is also why the number of abstainers, 14.8 million, far exceeds the number of votes obtained by any coalition. But abstentionism is not disorientation caused by the turnabout of this or that party. The crisis of consensus mechanisms, even clientelistic ones, together with the general worsening of the living and working conditions of a large part of the population, and the disappearance of any margin of mediation of social conflict, have caused distrust towards political institutions. That distrust exploded in the last 15 years. Since the 2008 elections, the great aim of the parties in election time has been to gather support from the ever-widening ranks of abstentionists. But if those who govern and those who aspire to govern read abstention as a reservoir of votes, as a reservoir of consensus to be contended for, as a passive mass, those who want to radically transform society in a revolutionary sense cannot but recognise in it an element of change. It is not certain that this drive for change cannot sooner or later be reabsorbed into the forms of compatibility of the political system. But non-voting is always a choice, regardless of the reasons behind it. It is an active dimension, the refusal dimension, which already marks the distance from the government, but which can also be the basis for further forms of refusal and opposition.

The images coming out of Russia, with young people fleeing to avoid forced conscription and with protests in the cities against partial mobilisation being harshly repressed, show us that it is possible to reject government-imposed massacre, that even under the severe repressive threat of an authoritarian regime it is possible to choose, reject and act. The force of these examples of anti-war struggle is formidable. They are examples that call us to commit ourselves personally, to organise and give substance to our rejection of war and the war economy.

To tackle the general mistrust in institutions, parties and government, an authoritarian turn has been prepared for some time now. The organs of representative democracy itself are also radically revising institutional forms, seeking stability solutions for political power in the face of distrust in institutions and increasing abstention. In the name of governability, efficiency, stability and the safeguarding of the “national interest”, dirigiste solutions are being pushed forward, also under pressure from increasingly globally influential autocratic models. The developments of the war in Europe have only accelerated these processes. On all sides, propaganda, in a general climate of uncertainty and impending disaster, creates the need for the leader and the “strong government”. But there are those who do not respond to the call to the ballot box, despite the fact that the election campaign has been more than ever focused on the personalities of political leaders, despite the great fears we experience in these years because of the blind alley into which the State and Capital are leading us, from war to pandemic, from misery to climate catastrophe. There is a part of society that does not participate in the election, that has chosen rejection. For the next government it will be a problem in any case. It is up to us and all the forces moving on the terrain of struggles from below to ensure that this rejection of the election is not reabsorbed by some new party or government leader, that it is not conscripted into any army, but that it is transformed into a rejection of war and exploitation, into mass desertion from the slaughter into which the next government will want to throw us.