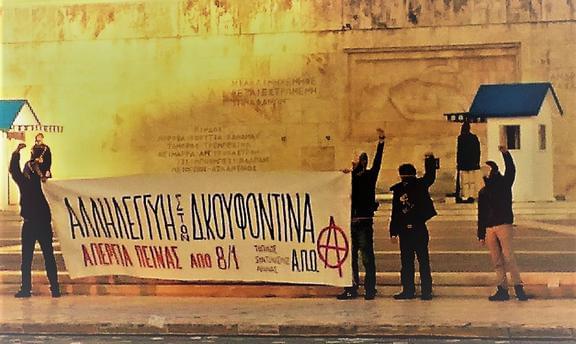 Financial support for covering of fines and court expenses

Financial support requested from the local coordination committee of Athens, Anarchist Political Organization, for the covering of fines and court expenses: https://www.firefund.net/apo

One of Greek state’s main priorities has always been, same as today, the promotion of antisocial restructuring which aims at society’s transformation. After the elections of 2019 and the renewal of the political system, which is in general moving towards the direction of modern totalitarianism, today’s far-right version of the political management appears even more aggressive in pursuing the ever-existing authority’s declared targets. Some of these targets that can be listed are: privitizations, looting of the natural world, elasticization and intensification of work, the cultivation of racism and propaganda, the even tighter collaboration with NATO, the permanentisation of the Greek state as Europe- Fortress’ guardian and also the oppression against squats, social and class struggles and an attack towards the anarchist movement.

The political and financial bosses’ aggressiveness is expressed with a wide repressive campaign by the state that is in progress and which attacks every aspect of social and class resistance from people bellow, from the dozens of intrusions and evacuations of squats all over Greece, the police occupation of Exarcheia, the abolition of university asylum and the attack against its social character, the illegalization of trade unions’ action up to suppressing a number of mobilizations, a practice that is now legalized due to the recent demonstrations’ restriction law. All of these methods and attacks against strugglers, the anarchist and antiauthoritarian movement and social and class resistance in general have something in common: authority’s fear against the mighty classes, against the rebellious dignity of the world’s oppressed plebeians, that struggles against exploitation and oppression. At the same time, the ‘zero tolerance’ dogma is being upgraded into a generalized strategy of ‘Preventive Anti-Rebellion’, at the same time that the covid-19 pandemic works as a historic milestone and as an accelerator of the systemic crisis.

As anarchists, we realize that oppression today is a vital point in the agenda of state’s strategy. This polemic strategy against all those who struggle is part of a systematic effort of decades from the Greek state, which wants to subjugate social and class resistance and to impose submission. We struggle in order to enlarge social and class resistance, to overturn political and financial bosses that are responsible for the exploitation, oppression, poverty, social cannibalism.

In that context, we participated in actions and mobilizations that received a repressive attack by the state resulting in a number of arrests, injuries, fines and criminal prosecutions. In specific, a) 4 of our comrades were injured, arrested and were imposed fines in the antistate – antifascist gathering in Galatsi, in November 2020, which was the first mobilization that was on the basis of the new demonstrations’ restriction law, b) 2 more of our comrades were arrested and were imposed fines on the 6th of December, the day that 15-year- old A. Grigoroupoulos was murdered by policeman Korkoneas in 2008, when there was imposed a prohibition of gatherings all over Greece for more than 3 people. The state, taking advantage of covid19 pandemic, imposed such prohibitions with clear political characteristics, their target being social and class mobilizations. The same prohibition had already happened on the 17th of November’s mobilizations, c) 4 more of our comrades were arrested and were imposed fines during an intervention in the Health Ministry in solidarity with the D. Koufontinas’ hunger strike on the 18th of February 2021, d) during a demonstration, with the same subject, towards the headquarters of governing party New Democracy in Moshchato on the 20th of Februray 2021, 2 more of our comrades were arrested and imposed fines and e) 2 more arrests of our comrades took place during the symbolic occupation of a Ministry of Culture building on the 25th of February 2021, in solidarity with D. Koufontinas’ hunger strike.

The total amount of fines that were imposed on our comrades is 3.600 euros, not including the court expenses.

In view of the solidarity among the oppressed, we create this request in order to pay part of the fines that have been imposed. Any extra, possible, income will be used for the same purpose to cover the whole amount of fines as well as to pay the court expenses.

AGAINST STATE AND CAPITALIST BARBARITY

SOLIDARITY IS OUR WEAPON

ORGANISATION AND STRUGGLE FOR THE SOCIAL REVOLUTION, ANARCHY