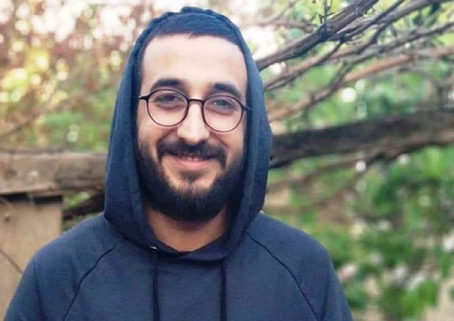 Bayram Mammadov 1995-2021. We report the sad news of the death of an anarchist and conscientious objector comrade Bayram Mammadov at the age of 26 years in Istanbul at the start of May 2021 after being missing for 2 days, His death was initially reported as 4th or 5th May by some sites but it appears he was found dead on 2nd May, although friends were not able to find his body in the hands of the authorities until later. Police initially said they had no further information except an eyewitness report that Bayram had jumped into the water to fetch his slippers and drowned and they did not have his body. After another day it turned out his body was in the morgue.

Bayram Mammadov was a young Azerbaijani activist who was one of two (along with Giyas Ibrahimov) imprisoned by the state in 2016 for graffittiing the statue of the former president Heydar Aliyev with the words “Fuck the system” and “Happy Slave Day” in Azeri — a play on the phrase “Happy Flower Day” (national holiday that coincides with Aliyev’s birthday). Bayram was set up on bogus charges, beaten, threatened with rape, sentenced to 10 years, imprisoned and tortured. The two were eventually released in 2019 via presidential pardon, of the former president’s son. In February 2020, the European Court of Human Rights Since 2020 ruled a violation of human rights under several Articles of the European Convention on Human Rights and ordered the state to pay compensation to each prisoner. Since then, later in 2020, Baryam had been in Istanbul for his studies. [information summarised from OBC article]

Devrimci Anarşist Federasyon (DAF) quickly protested outside the Azerbaijan consulate in Istanbul with the banner “The state murdered Bayram”. https://anarsistfederasyon.org/bayramin-katili-devlettir/

“Bayram Mammadov has been the target of the Azerbaijani state since the first day he opposed it. He was tortured, slandered, imprisoned, and ultimately forced to live as a political exile. Now the Turkish state says that Bayram committed suicide. We know they are lying. As we wrote in our banner, the state murdered Bayram. We were protesting today in front of the Azerbaijan consulate with our banner to spread the truth to the whole world. We will not stop asking what happened to Bayram!” https://www.facebook.com/DAFederasyon/ (video and photos of protest here).

Follow these links for other information in French via CNT-AIT and in Italian via OBC and in Umanita Nova (Istanbul: Lo stato ha ucciso Bayram!).