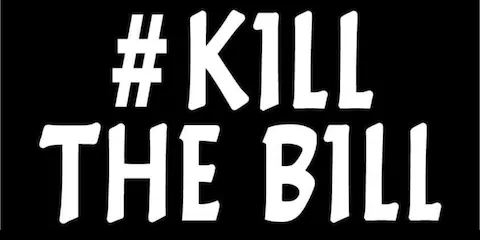 The Police, Crime, Sentencing and Courts Bill is a new law in England & Wales which is not yet passed but contains news powers for the State to limit protest. The government has had its eye on the Black Lives Matter movement after the large demonstrations last summer, as there is a new sentence for toppling statues of up to 10 years in prison. The proposed law also includes an offence of “intentionally or recklessly causing public nuisance”. This is most obviously aimed at direct action aimed at causing economic damage, blocking roads, or tactics like lock-on or self-gluing which are often used in environmental actions to prevent destruction of habitat, most recently due to the large HS2 high speed rail infrastructure project.

There are also new powers to prosecute individuals for not following ‘restrictions’ even without being directly informed of them and the law allows the police to place limits on ‘static’ protests such as vigils which are currently treated differently from marches. Fines for individuals can be up to £2,500 for not obeying orders. One of the worst parts of the Bill is the attempt to effectively criminalise Gypsy, Roma, and Travellers. The new criminalisation of trespass will also target other van dwellers, rough sleepers, squatters, ramblers and protest camps.

A wave of Kill the Bill demonstrations has emerged over the last two weeks after the kidnap from a park in London and subsequent murder of Sarah Everard, which a Metropolitan Police individual has been charged with. Reclaim These Streets had tried to get the Met to agree to a march on Clapham Common but was officially cancelled by the organisers after the police used COVID‑19 pandemic restrictions to ban the protest and courts refused to intervene to allow an exception. Similar events planned for Edinburgh and Cardiff were replaced with online events. Static vigils for Sarah Everard, also focussing on violence against women in general, still took place in several cities including London. The police violently supressed the London vigil using COVID-19 powers.

The next weekend in Bristol, on 21st March 2021, several thousand people took part in a Kill the Bill demonstration where the police used batons, pepper-spray, horses & dogs and fed the press stories about injuries on themselves that were found to be untrue. In the days after, protests continued, including a camp of 150 people on College Green near the city centre, focussed on the trespass element of the law, that was broken up by police on the evening of 23rd March, and a third demonstration in the city centre that attracted over a thousand on Friday 28th March and where police appeared to be using increased violence, beating and chopping at people on the ground with batons and shields.

The Bristol group of the Anarchist Federation were quick to respond to the usual outrage and distortions of the state and distortion of the mainstream media about these kinds of protests, with three blog articles:

22nd March: WHAT ACTUALLY HAPPENED IN BRISTOL – AND HOW A NARRATIVE IS BUILT

27th March: 7 LIES POLICE HAVE TOLD YOU ABOUT THE BRISTOL PROTESTS

These protests are certainly having an effect with even the police questioning the need for the new powers. Continued pressure, and analysis, is therefore extremely important. COVID-19 powers are due to be extended for another 6 months even without the new law. In the coming months and years the British state will be making the working class pay for the pandemic with new austerity measures and will be able to use these new powers in an attempt to smother dissent. In addition, the idea of a ‘Covid passport’ is being put forward as a way to get people back into commercial spaces, which for a country that doesn’t already have identity cards, is a serious development. Making ID cards or electronic forms of identity compulsory or necessary as means of entitlement would restrict freedom for many people.

Further demonstrations have already been announced as part of a national weekend of action over the Easter weekend.