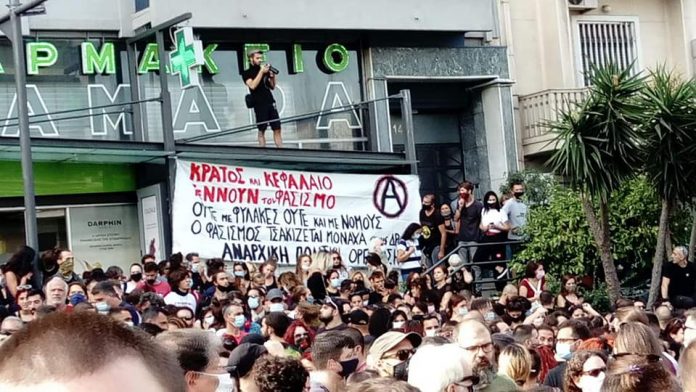 On September 18th, 2013 the paramilitary squad of golden dawn proceeds to a
murderous attack in Keratsini (Athens), resulting to the assassination of
the antifascist Pavlos Fyssas, after being stabbed to the heart by the
member of golden dawn, G. Roupakias. This was another one of the numerous
murderous attacks the paramilitary gang of golden dawn made against
anarchists, leftists, syndicalists, refugees and migrants, squats and
self-organized and occupied spaces. Following the State’s policies and the
medias dictations and protecting the Capital’s interests, the fascists
always strike against the most violently exploited parts of society,
against the revolutionary movements that are explicitly targeted by State’s
repression.

Seven years after Pavlos Fyssas’ assassination, the GD trial is coming to
its end on October 7th, with most of the accused fascists being free to
walk around all these years. The main objective of this trial is to wash
off the nazi-gang and the State, who is the main orchestrator and
instigator of all the fascist-paramilitary attacks, by using these groups
as a reserve for terrorizing the society and repressing the social and
class-resistance. In this direction the attorney’s proposal (A. Oikonomou)
attempts to distinguish the fascist attacks as separate cases, as also to
disconnect them from whole GD-organization. As a matter of fact she (the
attorney) does not recognize the criminal and paramilitary nature of GD,
which leads to its murderous actions, and paves the way for light
accusations to the GD-leadership.

In all these seven years, both the paramilitary neonazi actions in the
streets, as also the “institutional antifascism”, that the state attempted
to promote as the only guarantor to the “democratic normality”, in order to
establish the theory of the two extremes and to washing off the nazi’s
actions, found against them the courageous, decisive and permanent
antifascist action. The numerous massive antifascist mobilisations, formed
the real barrier against fascists’ rise and their attacks and led to their
retreat from the public sphere. From the antifascist manifestations in
commemoration of P. Fyssas and S. Luqman death, the dynamic demonstrations
during the GD trials, the central antifascist mobilizations and the
everyday struggles in the neighborhoods, to the barricades of
internationalist solidarity against nationalism, intolerance and war.

Seven years after Fyssas death, we are facing the outbreak of the covid-19
pandemic and the intensification of State’s and Capital’s attack to the
society. The beginning of a new round of pillage of the social base, with
main points: labor’s devaluation, the abolition of social insurance, the
continuation of privatisations, as also the restructuring of educational
system and the criminalisation of syndicalist action. From the
normalization of the state emergency through the repression of social and
class movements and especially the anarchists/antiauthoritarians, the
evictions of squats, the police occupations of entire areas, to the banning
of demonstrations and the generalized upgrading of the legislative arsenal
against the people of the struggle. From the expansion of war against
refugees and migrants and their attempts that aim to their demonization and
their extinction from the public space, their incarceration into
concentration camps, to the looting of nature, through the activation of
capitalist engines of development that destroy local communities,
mountains, rivers, lakes, seas and forests, in the name of profit and of
their total imposition over humans and nature.

State’s repression constitutes today the dominant component of State’s
policy. This declaration of war against all of those who are struggling, is
a part of the systematical attempt of the Greek State to subdue social and
class resistances and impose a complete submission for society that goes on
for decades. An attempt that was blocked by the massive mobilisations,
revolts and struggles over the last years.

With solidarity as our weapon, let’s continue the counter-attack against
state and capitalist brutality. Let’s revitalize social and class
resistance. The only real answer against war, nationalism and fascism born
and raised by the state and capital, is the organisation of the social and
class counter-attack. Without any illusions that the exploitation and
repression system can improve, without any illusions that any government
can raise a real barrier against fascism, let’s fight together from below,
with internationalist and class solidarity as our weapon. Let’s struggle
together, locals and migrants, workers and students, for the construction
of a society of equality, justice, solidarity and freedom.

*We do not forget the numerous murderous attacks against refugees and
migrants, against squats, self-organized spaces and anarchists, leftists
and antifascists.*

*We call for an Anti-state – Antifascist – Anti-repression demonstration on
Wednesday 7th of October, day of the final judgment on the GD trial at the
Court of Appeal in Athens at 10 o’clock. *