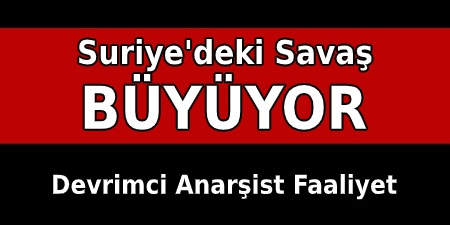 Long-awaited developments have begun in Idlib, which is the remaining theatre of war in Syria and is also the last corner of the region where the jihadist gangs supported by Turkish Armed Forces (TAF) are trapped. TAF troops were attacked by aerial strikes on the night of 27 February to 28. This was shortly before the “ultimatum” that the Turkish Republic (TC) gave to the Syrian Army to withdraw from the locations it took in Idlib. According to TC sources, 34 soldiers died as a result of the Syrian airstrikes.

In a statement made by the Russian Ministry of Defence, a message was sent to Ankara that TAF elements should not leave the observation points established in accordance with the Sochi Accord. The “striking” message in the statement made by the ministry was that “the Syrian air force is operating against HTS (Hayʼat Taḥrīr al-Shām, Levant Liberation Committee) targets and TAF troops should not be in this particular region”. With these statements, Russia strongly emphasized the partnership of TC with Al-Qaeda derivative HTS, which is accepted as a terrorist organization by the whole world.

The war is growing rapidly, and the use of heroic language used by the State has increased, whilst the media rapidly dons it war uniform and almost all of the opposition quickly adapts to the new situation. Since 2011, the recent air strike is one historical turning point of the war in Syria. We experienced another of these historical turns on May 13, 2013 after the bomb attack in Reyhanlı, which cost the lives of 53 people. Although it was not said who and why “TC was at war” in Syria, we felt other shocking reflections of this war in our geography very close at the massacres of Suruç, Ankara, Reina, İstanbul Yeşilköy Airport in the coming years.

The “usefulness” of the Syrian War, which has caused such devastation on the people affected, to regional and global states (and especially the Turkish Republic) is clear. TC engineered the civil war in Syria into increased nationalism within its domestic politics and repressive measures such as the state of emergency against opposition on the streets. Similarly, with its military and administrative presence in regions such as Afrin, Euphrates Shield and Serekaniye, it effectively fulfilled a “Neo Ottomanist” promise to its nationalist-conservative base.

We know that wars provide the means for States to suppress opposition within their borders, to silence voices against power, to stop demonstrations, and to accustom society to “state of emergency” practices. During a time of war, the “democratic” practices of the state are put on hold; social pressure and passivity increases.

The ongoing process of war will be used to mobilize this rising pressure on society. Violent words and actions against the current situation will be punished, and state violence will become more evident. On the one hand, the state will shape these processes as it wishes, while on the other it will use the war for its economic purposes.

War as a Solution to the Economic Crisis

The economic crisis is destroying the lives of the oppressed; the economic crisis is being hushed up by the war! A minimum wage was announced in December: 2324 Turkish Lire! According to the unions, the monthly food expenditure required for a family of four to be healthy, balanced and adequate is 2219.45 TL. So, only 105 TL above the poverty threshold is deemed proper for workers. Moreover, 43% of workers in Turkey are working for the minimum wage. In the same year, the budget spent by the Turkish Republic for on its Armed Forces is 19 billion dollars. And, according to data from 2019, the wealth of 25 billionaire bosses in Turkey adds to £43.1 billion.

For many of those who work, the amount in their hand is not enough to make a living; some are looking for a job and can’t find one so they become dependent on others for a bite of bread. While the economic crisis and loss of income has brought the oppressed beyond the point of taking their own lives, the wealthy have accumulated yet more wealth by turning the crisis into an opportunity, creating new wars with new tenders for business. War speeches on TV with news containing weeping and decorating of “martyred soldiers” take place while the bosses increase their share of the cake with this guaranteed business.

It was reported that after the air attack on the TAF in the Idlib region of Syria, the Turkish state decided not to prevent migrants from passing to Europe by land or sea. AKP Spokesperson Ömer Çelik said “Our refugee policy is the same, but there is a situation, we are no longer in a position to hold refugees”. Many immigrants in Izmir, Canakkale and Istanbul were directed to the beaches and Thrace. Europe was being threatened of an acceleration of the movement of migrants to the West from Turkey, something that could become continuous due to the worsening of the situation in Idlib.

The Turkish state, which uses immigrants as a trump card at every opportunity, enthusiastically played it after February 27. This was a barely concealed message to the EU and the West to give them support in Syria. The State did not hesitate to serve the immigrant issue to the world through its media, to open up a space for it to be a “player” instead of one where “games are played”.

The Turkish state’s war strategy, which became public after the war, is not only focused on political and economic gains in the current region. Its goal is to gain “influence” in the global political arena. It has tried to find a place in this arena by being a party to the ongoing wars from Libya to Cyprus, from Egypt to Syria, to support one or other of the parties involved or to be directly involved in the warfare. It has also tried to expand a “self-ordained” domestic politics beyond its borders. This self-ordainism has evolved to “conquest policies” with nationalist intentions, and support is provided in all circumstances from the nationalist-conservative mindset within the State’s own borders. The idea is that legitimacy will be achieved by drawing an image of the state which has influence in foreign policy and aims to achieve this status through aggressive policies.

For those who express their long-term goals (such as 2023, 2071) with epic rhetoric at every opportunity, neither the events experienced on February 27 nor the loss of lives any other time are important. Each and every megalomanic project, molded in accordance with a statist discourse, is marketed through nationalist intentions and holiness, so that the cost of the lives lost in the war is not questioned but instead melts into the ambiguity of martyrdom to the state. Individuals will be regarded by the State as “details” who will not be remembered in the next week, month or year.

Those with Power do not hesitate to plunder the lives of millions of people for the sake of their own interests, and, as in every war, they try to crush those who are oppressed in this war. What we need to do as the oppressed is not to be a pawn in the war of Power. What we must do is to defend our lives against being plundered, to continue our fight against all war propaganda and to build a free world.

Link to original article ‘The War in Syria is Growing’ in multiple languages, published 29th February 2020: