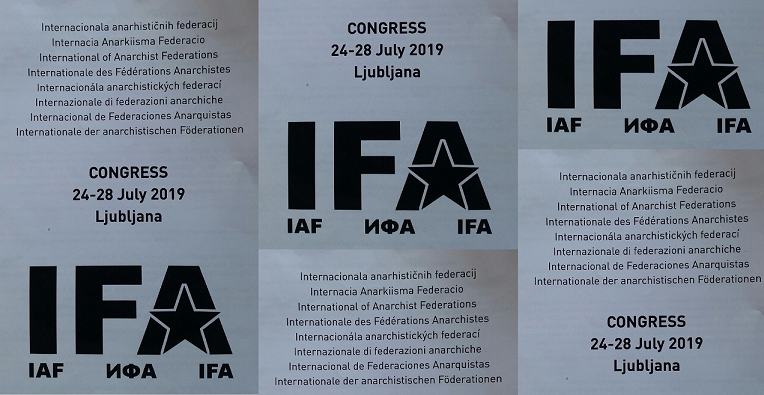 The 11th IFA congress is concluding today in the capital city of Slovenia after 5 days, following the last one in Frankfurt in 2016. The Ljubljana meeting includes comrades from many countries in Europe and the Balkans and smaller contingents from Latin America and Asia.

The format of the congress was one of plenaries, pre-planned meetings (on migration struggles, anti-militarism, repression e.g. in Belarus, gender struggles, anarchist media, working class movements e.g. in Brazilian favelas etc.) & workshops (e.g. on internet security and mental health) and panel discussions (including one on ‘authoritarianism’ with comrades giving perspectives from struggles in Brazil, Japan, Venezuela and France, facilitated by a comrade of FAO taking place both inside and outside of the Congress venue.

There were also public meetings each evening at the Metelkova centre e.g. Argentinian anarchist comrades talking about the Ni Una Menos movement and the broader gender struggle and another talk about the origins and practice of Anarchopunk in Brazil by comrades from São Paulo and Rio de Janeiro. Some recent projects of the individual federations were presented. There were daily cultural events including art and music, with a revolutionary choir and talks and stage performances by local and IFA delegates.

The infrastructure of the congress was hosted by the Federation of Anarchist Organising (FAO) and through self-organisation by the other participants including a contact information point, food preparation and an awareness group for individuals to contact with any problems. Federations also had an area in the venue to display their publications and other material. Posters, t-shirts, bags and stickers were prodcued to commemorate the 2019 Congress.

IFA congress 2019 agreed several joint statements (forthcoming on the website) and actions including migration and gender struggles and a committment to continue the IFA journal as an annual publication. The IFA Secretariat was passed from the Anarchist Federation (UK) to FAI Italia.

You can also read this article, from Umanita Nova introducing the congress, for more detail.