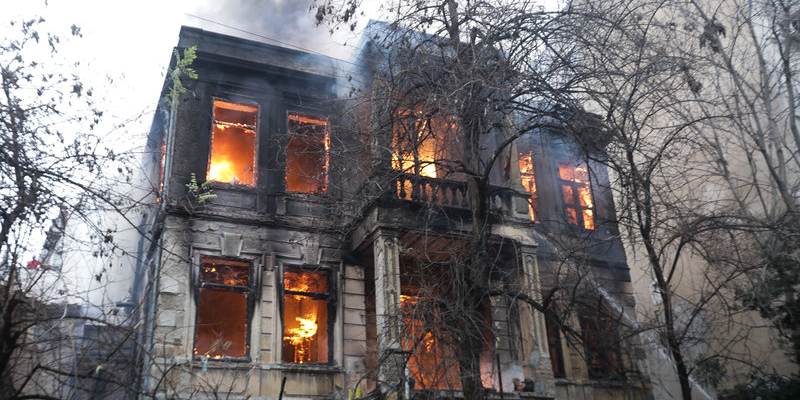 Earlier this month, the Anarchist Federation and friends in England hosted Greek comrades from the Anarchist Political Organisation to talk about the political situation in Greece and to raise awareness of the destruction by fire, by neo-fascists linked to local football firms, of the Libertatia social centre squat in Thessaloniki (Northern Greece). The squat has been run as an anarchist centre for several years and is now being rebuilt. Funds are being raised, with international solidarity, for its resurrection.

The comrades arrived in London on 14th January 2019 and left on the 20th. Talks and gigs were held at various venues in London (DIY Space for London), Manchester (Partisan), plus venues in Leeds and Exeter thanks to Red & Black Leeds and Exeter A Party. More than 200 people came to the London gig supported by punk bands (Eskorputas +Killdren + Romantik Dick + The Chain of Panic + Inner Terrestrials). Over £1000 was raised to support the reconstruction effort. The London gig also raised funds for legal cost of Russian antifascists imprisoned and tortured as part of a fit up aimed at identifying other individuals the state wishes to repress (see also rupression.com ).

Last Thursday (24th January), another anarchist squat in Thessaloniki was attacked by the same fascists throwing petrol bombs. Bookmarks bookshop in London was visited yesterday (Saturday 26th January by a person who was involved in an attempted attack on the Bookmarks solidarity event in the summer of 2018. showing the need for continued vigilance about the potential for right-wing attacks across Europe.